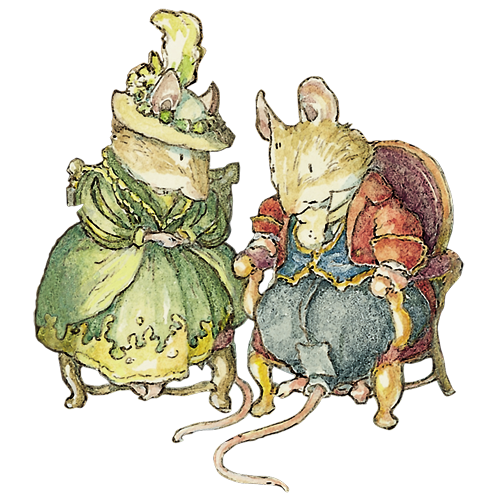 Lord Quercus Woodmouse is the head of Brambly Hedge and he lives with his wife Daisy and daughter Primrose in the Old Oak Palace. He often has to play a leading role in the many ceremonies that take place throughout the seasons. He is a loving father who enjoys hearing the scamper of little paws up the stairs and along the corridors of the house where he spent his own childhood. Daisy enjoys welcoming the other Brambly Hedge mice into her home, and sharing with them the noble rooms, the ancient furniture, the paintings and the carvings.

Because the palace is so huge, there is always plenty to do, but when she has time she likes to go down to the kitchen to decide on menus with Mrs Violet Crustybread, the palace cook. Daisy is also a very gifted painter and she enjoys sketching too; Primrose often acts as a model for her. Daisy dresses her up in her best clothes but it’s hard for Primrose to sit still. She prefers to be out of doors, sharing adventures with her best friend Wilfred.

BACK TO MEET THE MICE